By Jen in Bookland August 03, 2022
That is it for our Iceland adventures! I wanted to post one last wrap up just to say a few things I didn't put elsewhere, or organize my overall thoughts in one place.
First up some of my favorite things: 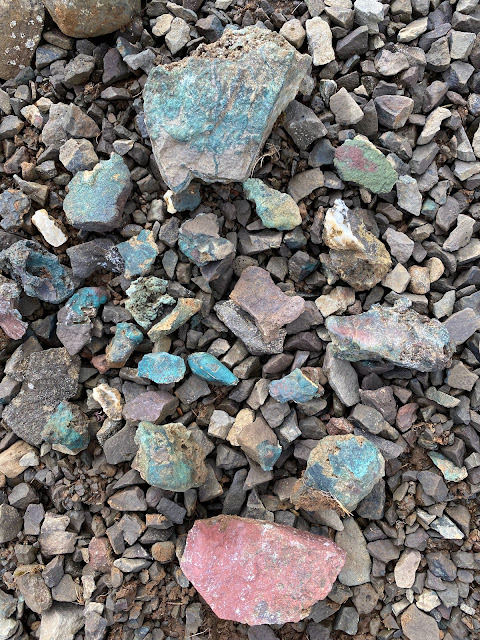 The colors! The rocks, the water, the ice, the mountains everything was so much more colorful than I expected! One of our favorite things to do was wander around spying on the rocks and finding the ones that were colors not normally seen in nature! I still can't get over the rocks we would find. The full spectrum of the rainbow was represented in lots of shades and tones and oh it was gorgeous! The colors would be splashed on the sides of the mountains, like near Stokksnes, or peaking out from the rivers and ground. I hadn't seen anyone talk about this before our trip, but maybe others are not as big a fan of rocks as I am. The only thing I had really seen prior to the trip referring to color was the black sand beaches. But these rainbow shades were amazing.
And the water! And the ice! It was all so gorgeous. One of the reasons why Jökulsárlón was my favorite place we visited and Brúarfoss was my favorite waterfall was the colors! Often times we would be driving along and the water would look photoshopped as it was so bright and colorful against the brown surrounding it. I still can't get over how vibrant and beautiful the colors were. I can't imagine how much more beautiful it would be with the bright green grass alongside it! 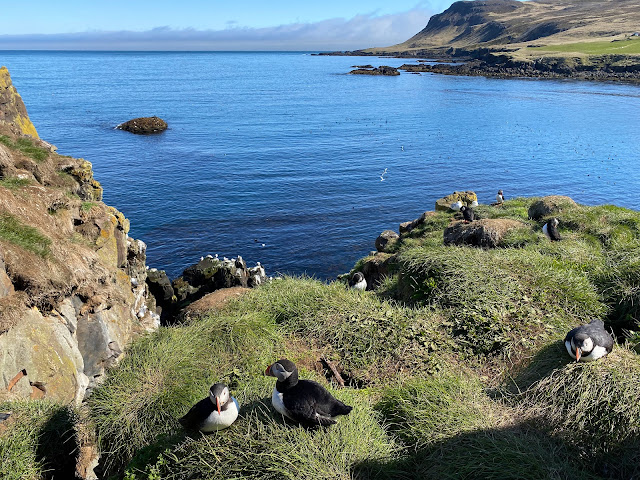 Another thing that I loved was all the cool birds we saw! I don't really understand why Puffins are all anyone cares about seeing as there are so many fun birds to spy on! When we were walking the Arnarstapi trail we passed by some people where there were a ton of different birds hanging out and flying around and they asked us if we had seen any Puffins. When we said no, they were so disappointed and told us we should hurry back a bit as they saw one back there...they did not care about all the fun wildlife right there that we were enjoying! Yes, the Puffins are adorable, but so are so many other ones too! Some of my favorites were the Oystercatchers - they were so so silly! and the Arctic Terns (though once home I see that they can attack people! If you get too close to their nest). Not to mention all the fancy ducks which I loved! My favorites were the Harlequin Ducks and the Tufted Ducks, though the Eiders were so much fun to listen to! We didn't see Puffins until the end of our trip, but we did a lot of bird watching the entire time! I loved the wildlife!
Next up some things that surprised me: 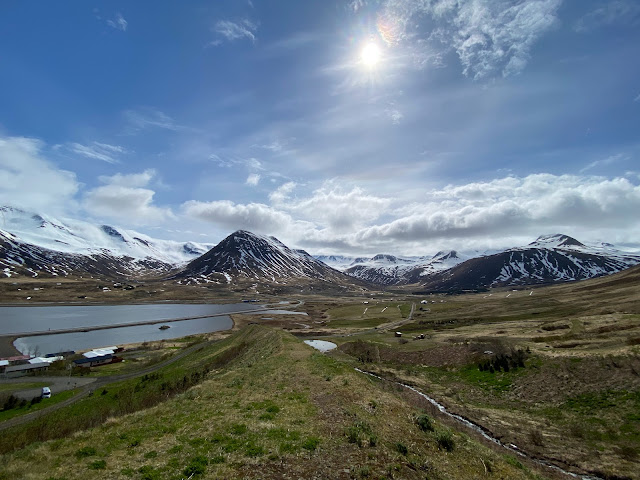 One of the most surprising things was how little the weather affected our trip! I was expecting way more wind, and way stronger wind, and way more overcast/rainy days. For the most part we had a ton of sun and just gorgeous weather! When I think of Iceland I think of sun...which I don't think is the usual. I know not everyone will have the same experience, often there was crazy wind a day behind us, but where we were it was sunny and beautiful. Or if we would have gone counterclockwise around the island we would have gotten caught in what sounded like a crazy snowstorm (people who were there the same time as us, but in the north when we were in the south reported winds that if you jumped it would move you over!). When researching the trip there were a lot of reports to make sure you park facing the wind if possible and make sure you are careful opening your doors as the wind can be so strong it will literally break your door if you are not careful (it will blow it open too far), but we never had anything close to that on our trip. I had planned in a few days for weather, but towards the end of the trip we hadn't used any!
Also surprising was how warm the sun was! 12 degrees when sunny and no wind was t-shirt weather which is crazy! That is normally way too cold for me to be in just a t-shirt! The wind could be bone-chilling cold, but without that the sun was so so so warm.
Prior to the trip I read a lot about how you absolutely need waterproof clothes and shoes, water-resistant will not do. Which we always bring waterproof gear when we travel cause you never know what the weather will be like, but we barely used it on our trip. Most of the time if we wore it it was for another layer for warmth, not water. There were two days where it rained a bit, but mist or light rain, where we wore our rain jackets, and one waterfall stop where you can walk behind them, but would get soaked without waterproof gear. We put it on for one or two other stops just in case, but our trip was not as wet as I had expected it to be! There were times when it rained in the evening once we were at camp, but that was fine as we were nice and cozy in our camper van.
I think overall we really lucked out with the weather. At one of our last campsites the person collecting payment was friendly and chatty and he was saying how that day was a good day as he could be outside and it wasn't freezing or raining and I said how we have had so many sunny days and he just looked at me like I was crazy. He was just like you are really lucky as it has been raining nonstop for a while now...I don't actually know that he believed me when I said we had been having such wonderful weather! But we did. We really lucked out with the weather. 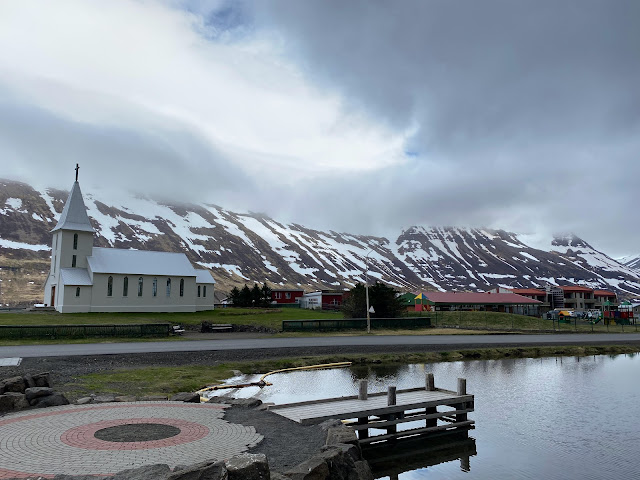 Another thing that surprised me was just how small most of the towns were. And how there were very few stores besides grocery stores and gas stations. Even the popular towns had mostly just housing. We were looking for a small frying pan to help with cooking some things, but it took forever to even find a town that had a store to look in. For example I was expecting Vik to have something, even if it was small, to spy in, but there wasn't much there. There was a small shopping center with a grocery store, an Icelandic wool shop, and a bakery/coffeeshop, then there was a gas station and so we searched on google maps for stores...and there were a few restaurants listed. No other shopping which...we drove through the town just to make sure google wasn't missing anything, but there was nothing. It was surprising as most places have shopping! I kept thinking how do people who live outside of/far away from the bigger cities get things they need? Do they just have to order it online?
A lot of the towns we were in when we were there even if they had restaurants or stores they were all closed. I know we were there in May which is still early and not prime tourist time, but if we were not cooking our food ourselves we would have had to plan way more to actually find places that were open when we needed food!
One other quick thing - gas stations are everywhere. Yes, you can go a ways between them, but not that far that you will be stuck as long as you don't let your tank go empty before looking for one. I know Raymond was worried about that before we got there, but we followed the when the tank gets to half full fill up rule and every time it got to that point there was a gas station close by. Even in the Westfjords there were plenty. I expected finding gas stations to be more of an issue and it just wasn't.
Oh, and grocery stores have limited hours. They often don't open until 10 or 11 and close around 6 or 7. We always tried to plan being somewhere with a grocery store when we needed them around mid-day to make sure they would be open (though it is easy enough to check the hours the day before and see when you can fit it in). Everyone online seems to love Bonus so we headed there first, but it is not my favorite. We honestly did not pay attention to how much things cost so it could be cheaper, but it is like a discount grocery store. We much prefered Netto (they have a great bio/veggie/vegan/health foods section!) or Krónan, but did go to Bonus too as they had these fruit peelers fruit snacks that were like fruit leather which we loved. And sometimes the other stores didn't have something we wanted so we would have to go to Bonus and get it.
And finally some general info: 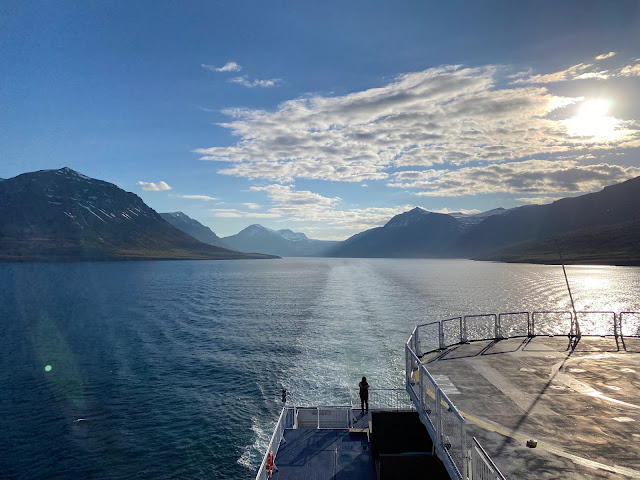