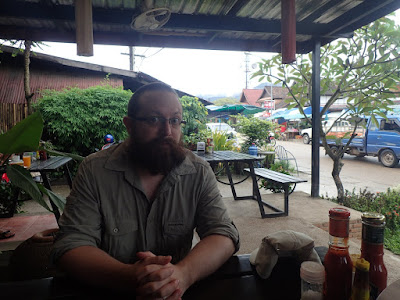 The day we headed to Luang Prabang we got up early to catch the 9am bus. The schedule said leave at 9am arrive in Luang Prabang at 2pm. We planned for longer after the trip to Vang Vieng took us way longer than we thought it would. We got up and had breakfast at our hotel which was the best of the trip. Muesli with bananas - you can't really tell but they did not skimp on the bananas - they are just under the muesli. Delicious! The bread was not that good and the jam stuff I have no idea what it was, but I was not a fan. The Muesli and fruit were plenty and tasty. The next few photos will be from the drive to Luang Prabang so might not be the best since they were shot out the window. So we got a pick up at our hotel from a bus that drove around town a little bit before dropping us off at a bus station. When we got off I looked outside and we were 2 doors down from the hotel...I was just like if I would have known we were just going 2 feet we could have walked...Around
Post a Comment
Read more
More posts