Showing posts from February 7, 2016
Show all 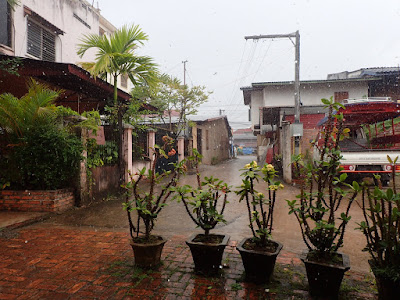 After our day in Oudamxay it was off to Luang Namtha. Our bus left at 8:30 and was supposed to be a 3 hour ride. We were once again the only non-locals on the bus which I like much better. We were really cruising along, making good time, until we hit this line of cars not moving. It was on one of those windy mountain roads so you couldn't really see very far, but no one was coming the other way either so there was something wrong ahead. Everyone just was sitting there, some got out and roamed around a bit, but I was so so glad we didn't have other tourists on the bus to complain about the delay.  There was this super friendly guy sitting behind us who was super excited to try out his english skills with us. We sat there for about an hour before we started moving again and then it was a quick ride into town. We didn't have far to go and we passed the problem - a landslide that had to be cleared as it was blocking the road.  When we got to the bus station it is
Post a Comment
Read more
More posts