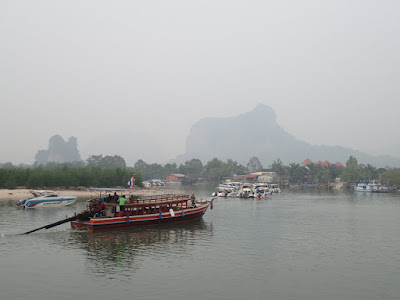 When we left Krabi Town we got a van to Ao Nang where the boat leaves from going to Phuket. The boat was a larger one, nicer, with inside seating on two levels or you could stay outside. The day was really hazy which was sad since we were traveling right through all the islands, but couldn't really see them. We later found out the haze was actually smoke from the Indonesia fires...not very good.    We stopped by Railay Beach first to pick up more people. Since we were a bigger boat we stayed out far and the smaller boats brought the people to us. It was fun to see the beaches where we were swimming from out in the water instead of on shore.      The rest of the ride was pretty uneventful, but quick. There was a couple sitting in front of us who talked for a good chunk of the time, at least 45 minutes, about who would like and comment on their photos when they post them to Facebook. Do you think Dan will? Yeah I think Dan will. What ab
Post a Comment
Read more
More posts