A little bit of sunshine 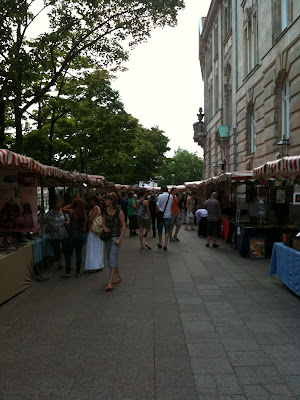 So last week it finally got to be summer and super hot and sunny here in Berlin. I think it was in the 90's most of the week and it is a good thing there are so many eis cafes around or I would have melted. It was a nice week - picnics in the park, eating lots of ice cream, cooling off in our apt. We were going to go swimming on Sat at one of the lakes, but then Sat was supposed to be overcast and thunderstorms so maybe this weekend. Sat we got up and went down to this veggie french bakery for a vegan brunch - I was told there would be croissants and crepes and such all vegan and all you can eat so I was pretty excited. We got there...and no croissants! There were crepes with jelly for filling and a few other things but nothing very exciting. I was very disappointed. Though since it was supposed to rain we took the subway down and on the way I noticed lots of markets so we had lot of adventures exploring on the way home. There were markets everywhere, but most of them a
Post a Comment
Read more
More posts