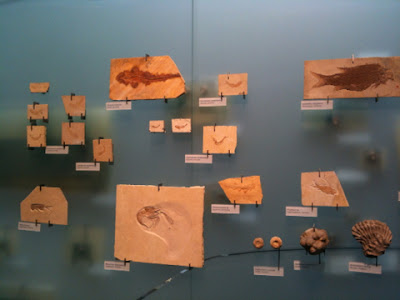 So not a whole lot has happened since I last posted. On our anniversary we were going to go on the boat tour of Berlin, but it was rainy and overcast so we decided to wait for a nice sunny day to do that. We had a few errands to run in the morning and then Raymond said about going to a museum. I saw the natural history museum and since I loved the one in Denver we decided to go there. You walk into this big room with lots of fossils and 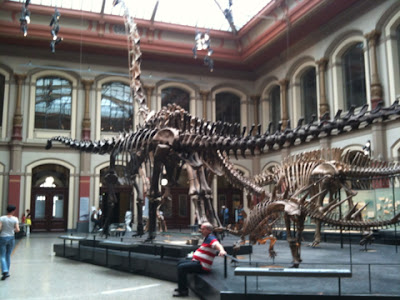 Dinosaurs! They didn't have a lot of things - this was the main room and is maim attraction of the museum. It was a tiny place, and they were doing renovations on a lot of the other exhibits. Apparently it is famous for having the largest dinosaur skeleton in the world! They also had these fun viewfinder things you could look through and if you point it at a dinosaur it would show this animation that filled them in and then showed them running around or eating or whatever. I thought it was fun. 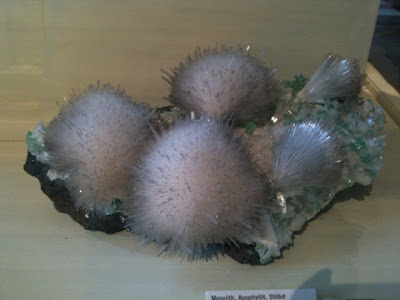 There was also a large room of rocks and minerals which was fun. Most of them were spelled slightly different which was fun for me. I thought it was a nice collection. There were also some displays other displays but nothing too exciting. There was supposed to be something on mammoths, but it appeared to be closed off or something...not sure since there were big signs outside for it yet we could not find it.

After the museum we hung out at a cafe with some tea then headed to a park next to where we were going to eat dinner. 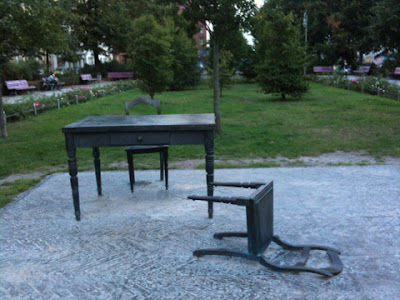 At the entrance to the park was this sculpture. We were sitting on one of the benches and I said to Raymond how I want to go over and pick up the chair. He was just like why don't you? I said I am pretty sure it is supposed to be like that and attached to the ground. Then we watched as person after person went over to try and set the chair upright again. It was pretty fun. The one lady tried to be all sly about it and tested it out with her foot first, but I knew what she was doing. You can't fool me! Then we had a lovely dinner which so good and more expensive (but still not as expensive as a nice dinner out would have been in Seattle which is crazy!).

The next morning I woke up and felt horrible! I had been feeling off for a few days, but I just felt super bad and my throat was all swollen and disgusting looking so I searched for an English speaking doctor to go see what was wrong. I found a practice one stop down on the s bahn and a few blocks from that station that had good reviews so I tried that out. You don't really need an appointment for the doctor, but I called anyways and they told me to come in shortly. It is interesting as you walk into the waiting room and everyone says hello to you. When you leave everyone says goodbye. It is kind of strange, but nice. The way the insurance works here is you pay 10 euro a quarter and then you can go in whenever you need to and you don't have to pay anything else. You can get anything done (as far as I can find) and you only pay that 10 euro a quarter. I saw the doctor and she was very nice and thought it was a bacterial infection and gave me a prescription and told me if I was not better by Sun then I was to come back and see her on Mon. So I got my prescription filled (drugs are 5-10 euro) and Sunday night I was still not better so back to the doctor. She then thought it was probably mono and wanted to take blood to do tests and I would call her back on Tues for the results. Sure no problem.

Tues I called back and she said they didn't have all the test yet, but it did look like mono as my liver enzymes were high or something, but she wanted me to come in for something else (I wasn't sure what as she didn't know the English work and I didn't know the German word she said). So back to the doctor and they wanted to do an ultrasound to look at my liver and spleen because apparently your spleen swells when you have mono. So this super nice lady did that and it was kind of cool as she was showing me all of my organs and stuff and my spleen was indeed swollen. I got home and told Raymond what happened and he asked how much do I owe for that? Nothing! I already paid my 10 euro. Apparently even if I need to go to the hospital that is included in the 10 Euro. Now since I don't have supplemental private insurance I won't get my own room at the hospital, but whatever. Just the fact that I don't have to worry about can I afford to get these tests done/will this mess up my budget or whatever is amazing. Being able to go to the doctor whenever and not have to worry about the cost....incredible.

The other thing with the doctors office - you do have to wait a while to get in. I think every time I went I spent about 45 min waiting. It was nice when I went for the ultrasound the lady came out and got me and put me back in the room so I could lay down until they were ready for me. I was pretty happy with that since I was pretty tired and not feeling very well. Anyways, in the waiting room most people just sit there. It still amazes me how people don't have to be entertained every moment of every day.  I quite like it. Everyone wasn't on their smart phones, they weren't even reading the magazines that were on the table. For the most part they just sat there waiting their turn. In the same vein we were watching Master Chef Australia season 1. There are 72 episode in a season and it is on 6 nights a week! Crazy. But we enjoyed it and the episodes were entertaining. Then we watched an episode of Master Chef US and man it was like they just flew threw the episode. Raymond made a comment about how they didn't even really show the people cooking or anything. It was a bit ridiculous, but I had never noticed it before. Since we had the comparison it was interesting to see how different the pacing of the show was. The US one was just like going as fast as possible, whereas the Australian one mosied. Then I thought of the German TV we had watched before and it is even slower paced which might be why people are not as hooked into their smart phones all the time. I mean they have their game shows here that last for hours and hours. 45 min watching someone pull a tablecloth out from under some glasses without breaking them? I don't think most people would watch that. I really like it though and am really enjoying it here.

So last week Raymond was out on a work trip. His company went down to the "mountains" in Southern Germany and worked during the day and partied it up all night. It was perfect timing since I wasn't feeling well I just rested and Raymond had lots of fun. Apparently the Germans in his car were saying how much they love the mountains down there and how beautiful it is, Raymond said they were like the foothills not really mountains :) It sounded like a good trip.

Last weekend we went and ordered the rest of the furniture we wanted and it was delivered yesterday. It is starting to look like we actually live here! We will hopefully have everything put away and organized soon so next time I will have photos of our place all furnished! It only took 3 months or so....