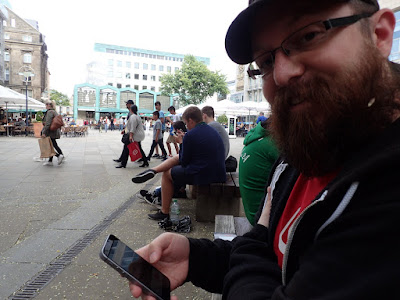 Last summer I looked up vegan street fairs/festivals around Germany. I thought we could take a long weekend to some towns we haven't been to yet and have some hopefully good foods as well. So that is why we went to Dortmund. When I told some friends we were going there for a long weekend they were just like why? There is nothing in Dortmund. It is boring. I thought eh. It will be fine. It is just nice to get away. Only we had so much fun there!! I would definitely go back again.
We arrived around lunchtime so we got some food and wandered around the city. It isn't that big

Though there were lots of people playing Pokemon Go so we sat in the parks catching Pokemon!