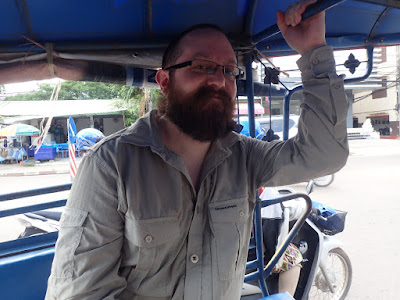 Our third day we set the alarm so we didn't sleep all day. We were heading out to Na Nam to spend a day on the Ang Nam Ngum Reservoir. We had wanted to get some breakfast before heading off so we set the alarm for 9am and it is a good thing we did as I would have slept longer. Breakfast was just dry cereal which confused the servers greatly - why didn't I want milk with my cereal? But it was alright. We also got our first "orange juice" of the trip. I guess technically it is orange, just bright neon orange, and apparently there is some juice in there as there is pulp, but it is not orange juice like you would thing. It is kind of like tang, but that is what all of the orange juice was like. There was even a stand at the one market that had a little thing set up so it looked like juice was coming straight from the orange, but it was also neon orange (and no the oranges there were not neon orange). It was odd. So it had said in the guidebook to go to the bus stati
Post a Comment
Read more
More posts