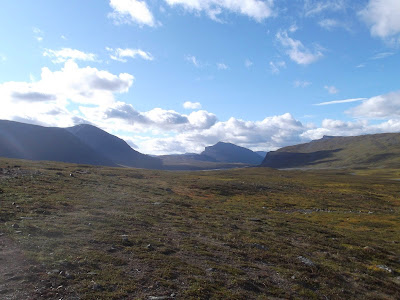 We awoke on day 5 to another sunny morning! It didn't last long, but it was nice while we had it. We lazed around in the morning since we had so much time and not very far to go and it was nice. Once we started walking out first break was at an emergency shelter that a group of German kids had taken over. They had a billion stoves going inside cooking breakfast for everyone. We walked on and quickly came to a trail junction where you could go up and over a pass to get to the trail that heads out, or go to the next cabin. We took the up and over, which took longer than expected. Every time we thought we were at the top we went over the ridge to find it was more up! Finally we got to the top and a nice camping spot so we stopped for lunch there with some Swedish guys. It was their first backpacking trip and they were asking us for recommendations for what to eat and such. They were really nice and it was fun talking to them. The clouds started coming in as we finished up lunch so
Post a Comment
Read more
More posts