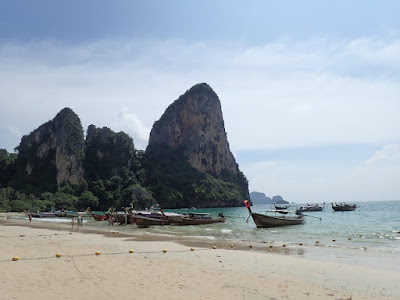 Alright part two of our fun filled day at Railay Beach. After lunch we went to see about making plans for the rest of our time. I had originally planned on going to one of the island between Krabi and Phuket, but since it was the low season there weren't really boats running there so we had to figure something else out.   Then we thought we would go spy on Ton Sai beach - another one that you have to follow a trail to get to. There were places to stay over there and we thought it would be fun to check it out. Only the trail we started following didn't go anywhere.   So back to the beach to see if we could find the correct trail   And we did, but the trail is behind that one rock that is sticking out of the water in the middle of the photo. It doesn't look too bad, but the waves were crashing on the jabby rocks and we didn't know how deep the water was and such so instead of getting all cut up we decided to spy the next day.   On the way back to
Post a Comment
Read more
More posts