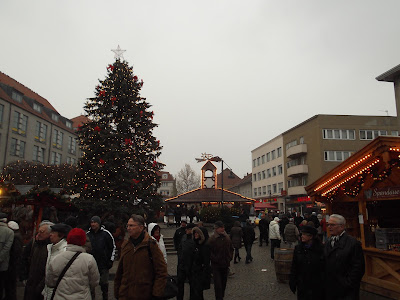 So starting the beginning of December it was time for christmas festivities  I was very excited for this. Really I had been waiting for winter since I got here...it just sounded like christmas time here would be nice. On December 1 we headed out to check out some christmas markets. First up was the one in Spandau which is supposed to be one of the biggest ones. I wasn't sure really what to expect, but I was hoping it would start snowing again to make it christmas magic, and just after we arrived it did start to snow! It had been freezing here and we have been bundling up with long underwear for the first time ever outside of camping which I am just so excited to live somewhere where it gets cold for the winter! Yes it is like -3 C which sounds cold, but somehow it is not too bad.   The market had a stage with people performing christmas songs so you could enjoy as you wandered. There is also tons of food to be had at the markets. We had some fresh potato chips which w
Post a Comment
Read more
More posts