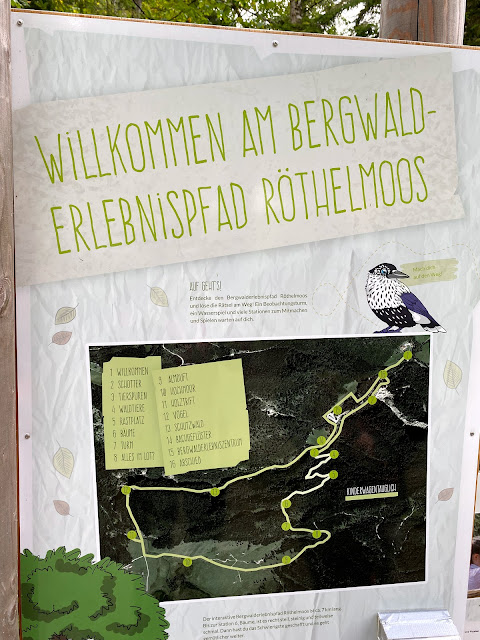 Day 5 was a travel day, but we still wanted to do a bit of hiking. It was the longest travel day between campsites - 2.5/3 hours total so we didn't want a super long walk. I found a trail that sounded nice in Urschlau which was about halfway between where we were and where we were going so after breakfast we headed off. When we got there the trail was actually this educational trail for one to learn all about the forest! We actually did the trail in reverse order as that is the way my trail app had it, but it was fun. 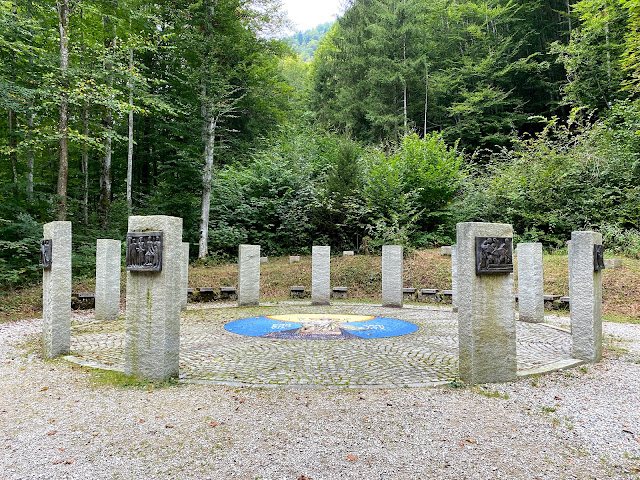 The trail started for us with these interesting Christian things. I thought these were stations of the cross, but now looking at the photo I don't think there are enough pillars... 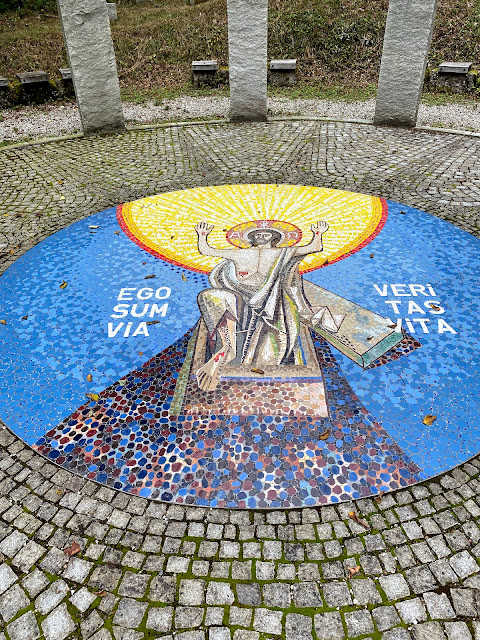 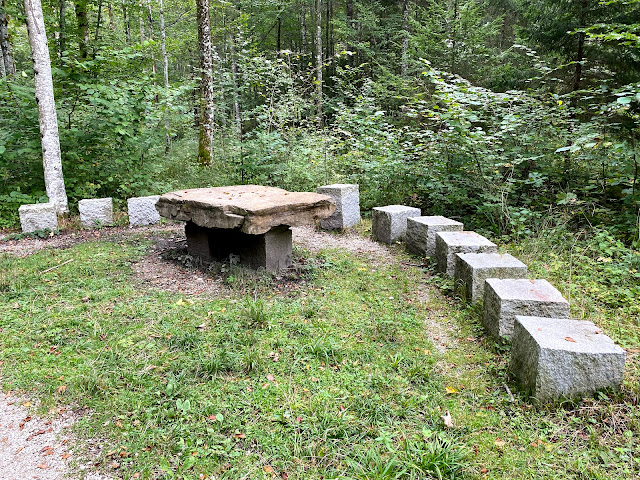 And a last supper? 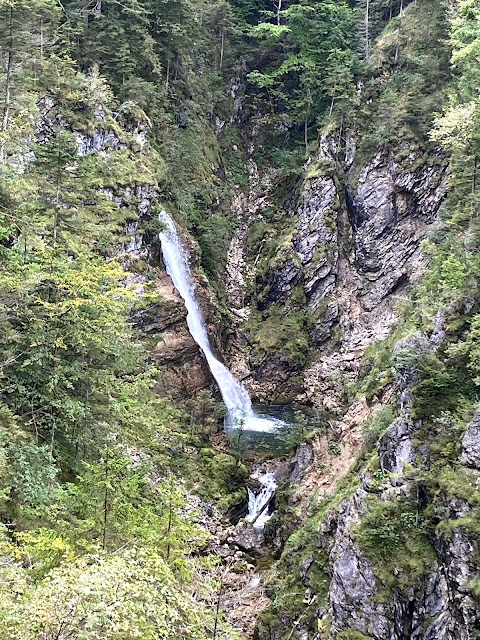 The first part of the hike was just a steady climb on a gravel road in the forest. Near the top was a display to listen to different bird calls which was fun, and an overlook to see this waterfall down below. 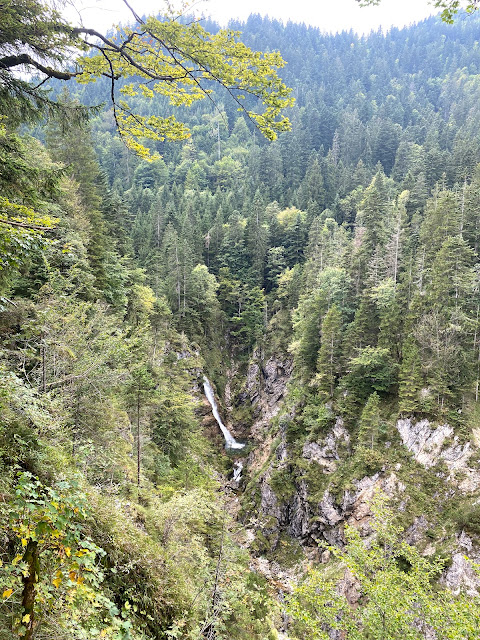 Not very close, but you could definitely hear it!

Then all of a sudden everything opened up and we were in this lovely valley! 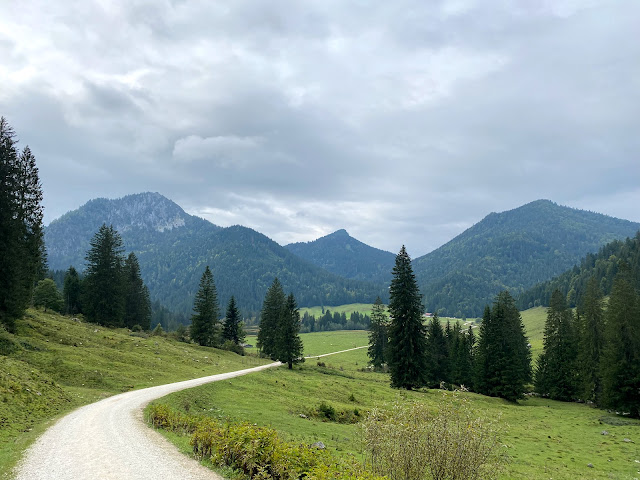 We didn't stay long, but there were 2 different restaurants you could stop and have a drink/some food at 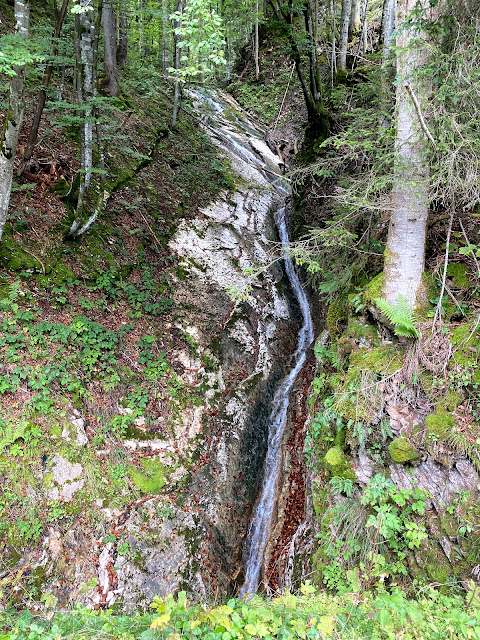 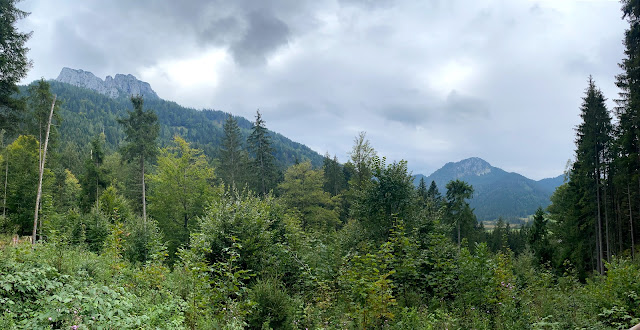 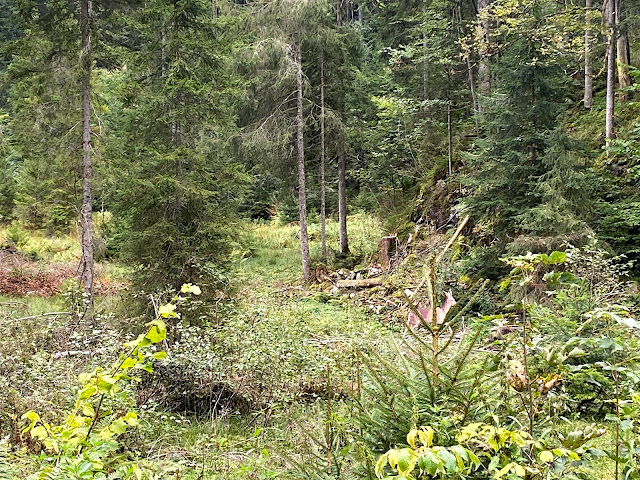 On the way down there was a stop with buttons to press to smell different plants which was fun. I remember there was thyme, but I don't remember what other scents. Then we got to this hunting stand like place with telescopes so you could look out and try and find the animals! 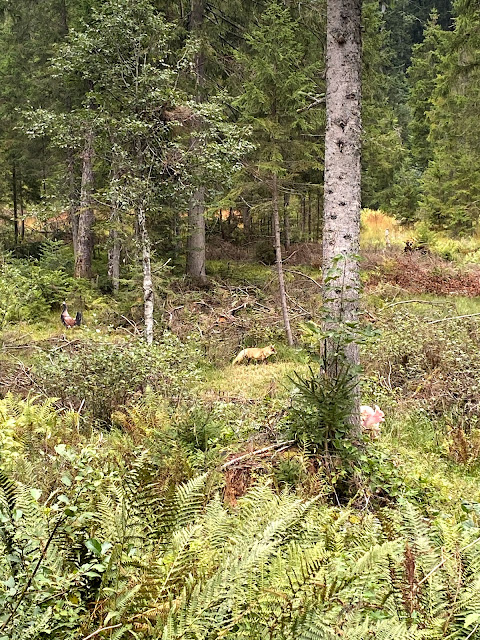 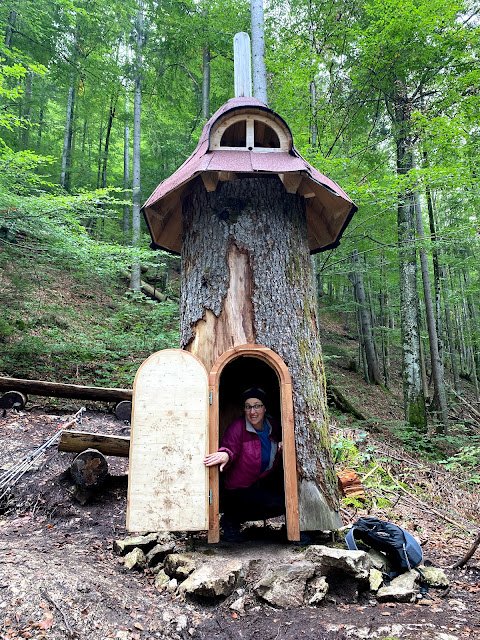 The trail back was super steep switchbacks so I was glad we went the reverse way. And then we found this little tree house in the middle 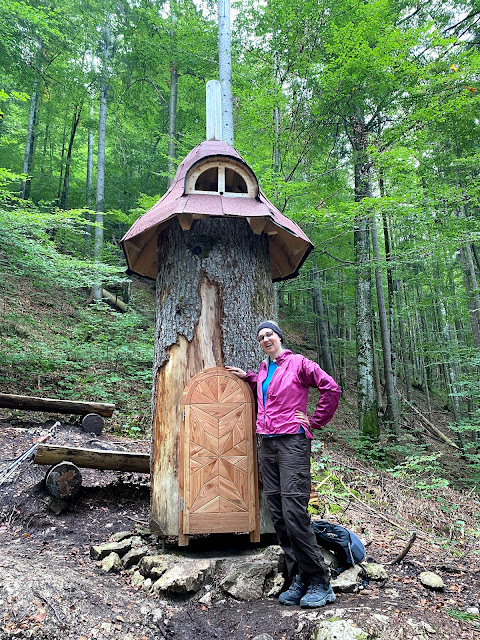 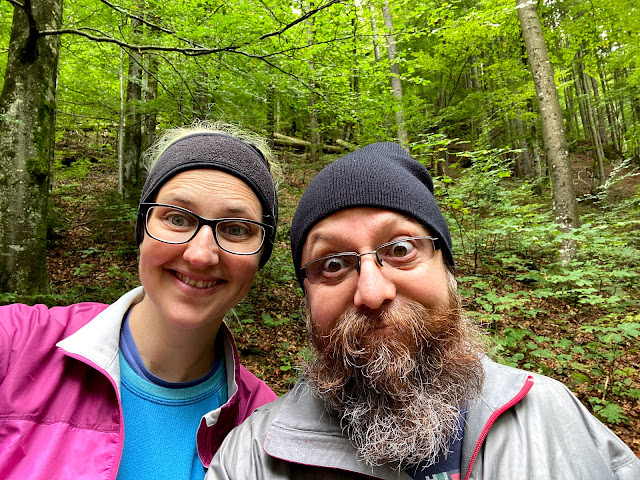 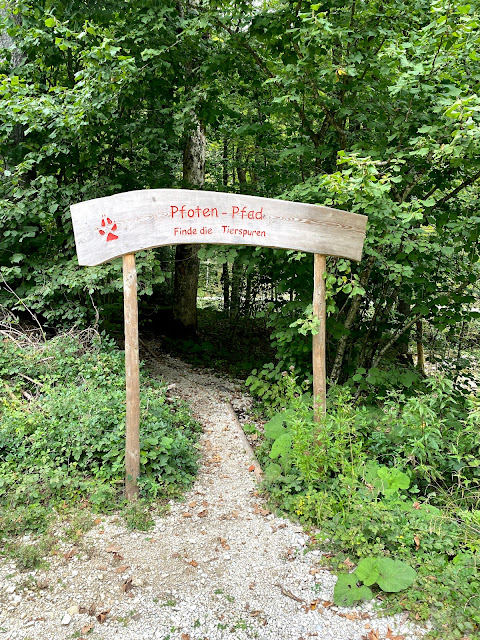 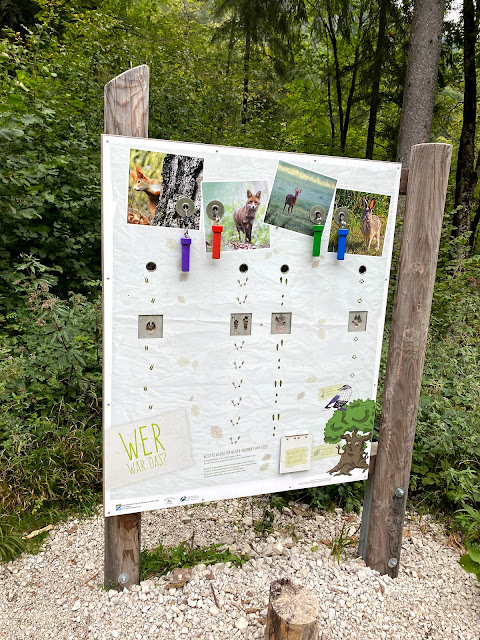 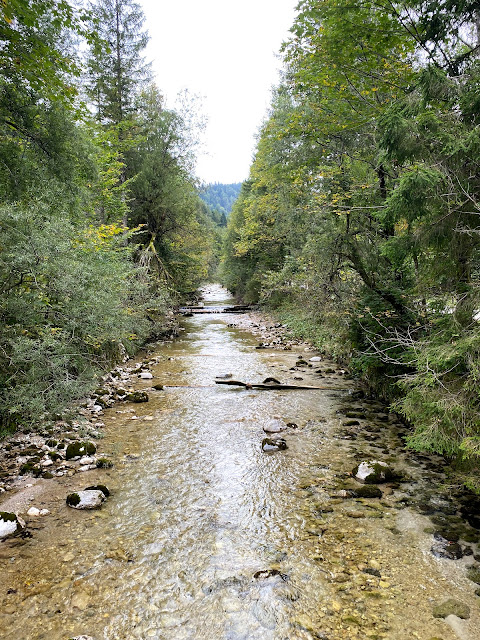 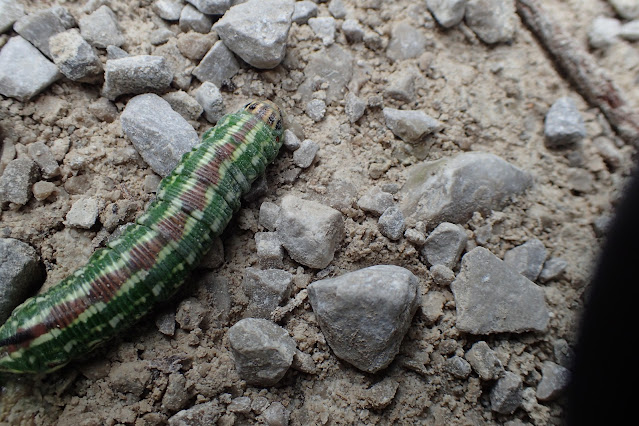 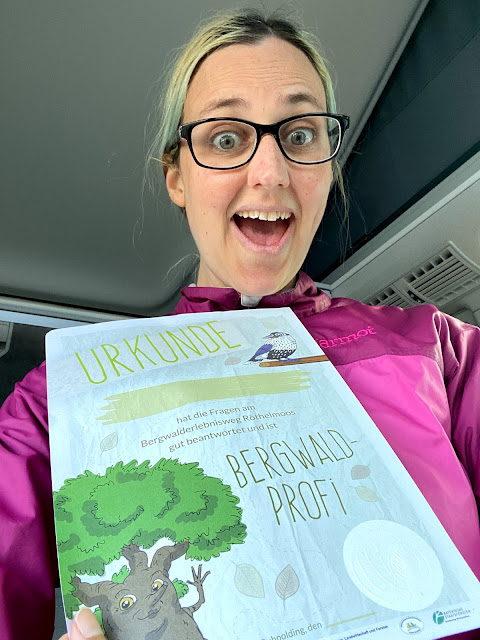 At the end was a station with a post with a button and I pressed it and couldn't figure out what it was for...then I saw the sign with a plastic container full of papers and we realized it was to get your paper stamped, which of course I did! 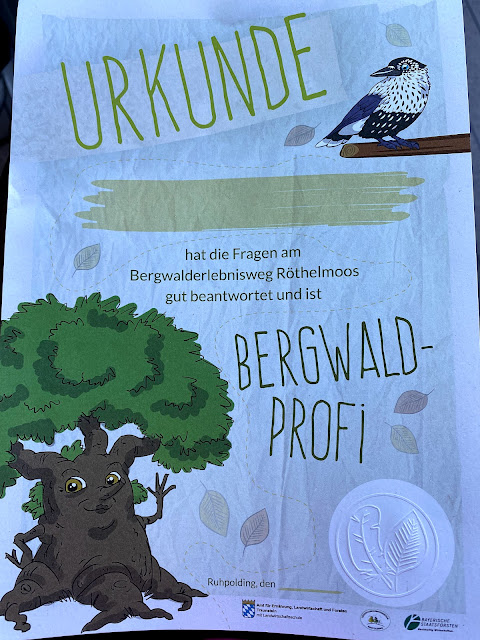 I know all about the mountain forests now! It was a fun trail. We were walking back to the car and I was carrying this paper and super proud of myself cause I mean not everyone..Raymond...got one...but there were some ladies who were having a drink of water at their car and saw me carrying it and were laughing at me in a mean way about it. It was like really? Why try and steal someone else's joy? I don't get people sometimes. But I also was then even more proud of myself and my new knowledge! 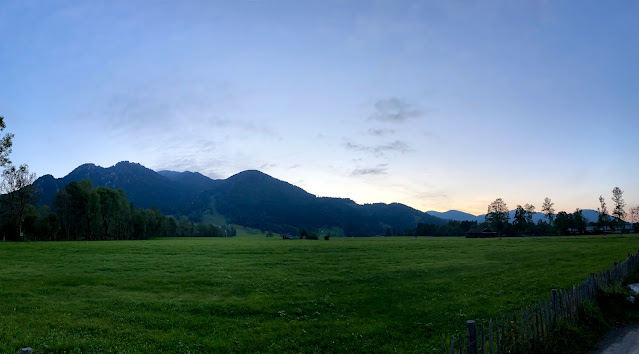 Finally our next campsite! The mountains aren't as close and as giant as the first campsite, but just as beautiful! 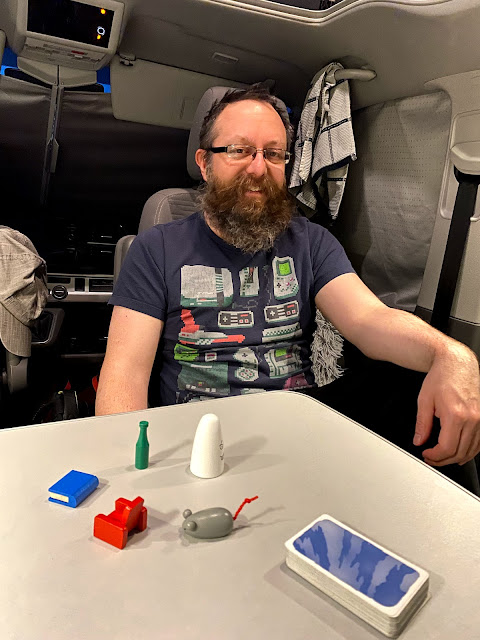 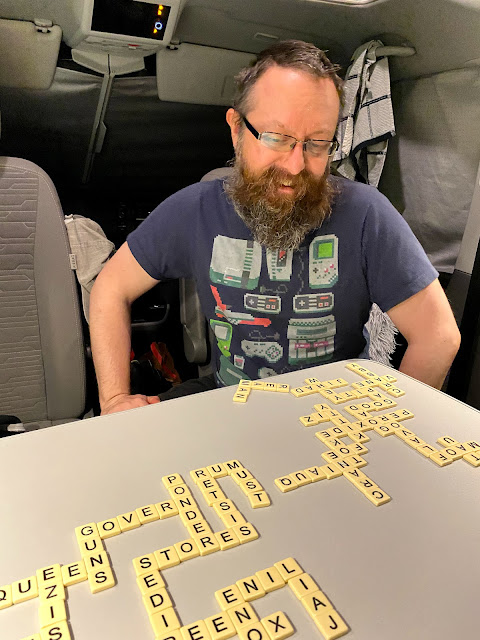 And we spent the evening playing games since it was an easy day.  My Fitbit recorded 12km/7.5 miles so not a bad day.