A Visit from Patricia! 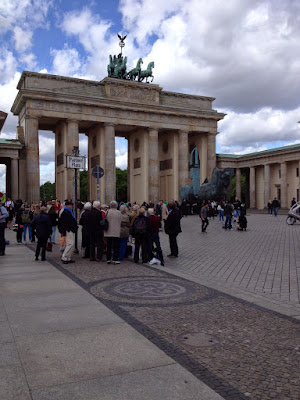 Just after we got back from Napoli Patricia arrived for a visit! I was super excited cause well..it is Patricia! Why wouldn't I be excited to spend a week with her? Unfortunately I was a little under the weather while she was here, but we still had a good time. Though I don't have many photos of her visit, or any of the two of us! I need to be better at taking photos next time...The ones to follow are from Potsdam, but I am going to intersperse them so it is not just all text. 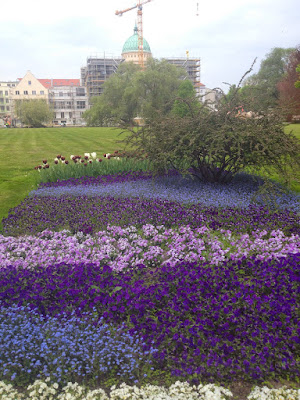 Thursday, the first day Patricia was here, we went on the free walking tour which I always enjoy. I think it is a good overview of the city and all the history here. That is what the first photo is from. There were all these strange sculpture pieces sitting in front of the Brandenburg Gate and I am not sure why.... 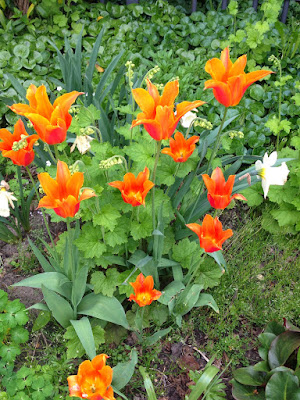 After a burrito lunch we decided to go through the Topography of Terror. Man that is a lot of information. They had a lot more outside than they did last time I went by there (or more than I remember them having) so by the time we read through that and all the info inside our brains were just on information overload. Really I think almost every day we had information overload as there is just so much information! Interesting, but a lot to take in. Then some of Raymond's vegan coworkers were meeting up for dinner so we joined them there which was a nice end to the day. 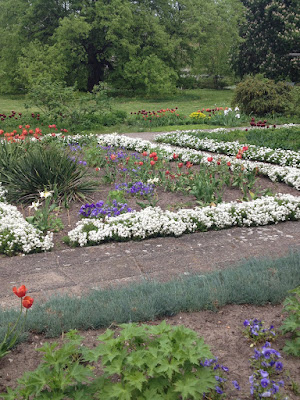 Friday we decided to do Museum Island! We went through all the museum with just enough time to run through the special exhibit at the last place before it closed. That is a lot for one day, a lot of walking on those hard floors, but we did it. Then we had a sit by the water to rest our feets and just have a break before meeting up with Raymond's coworkers for drinks at their favorite bar. It was really another nice day. 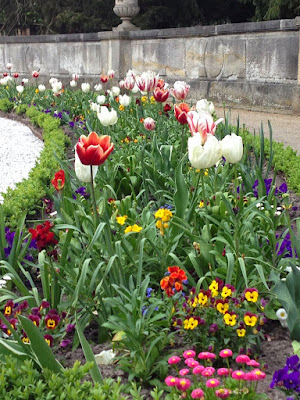 Originally we were supposed to go down to Dresden on Saturday, but there was a train strike on and it would have taken us forever to get there so we canceled that. Instead we went down to Potsdam for the day. Really I woke up Saturday morning feeling horrible. I was going to just send Raymond with Patricia to Potsdam cause I just wanted to sleep all day. Sat was definitely the worst day for me as I just was not anywhere near 100%. Unfortunately Raymond had to work that morning (he usually doesn't, but this was right before the Microsoft takeover and he had to get some things ready for that) so Patricia and I headed down to Potsdam. 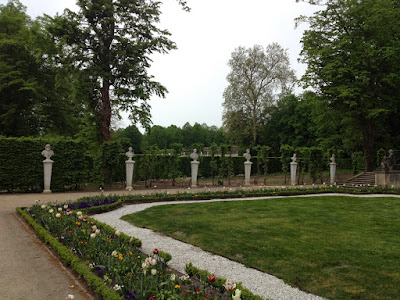 It was really beautiful there. All the flowers were blooming and we wandered through town and out to the park with the palaces. 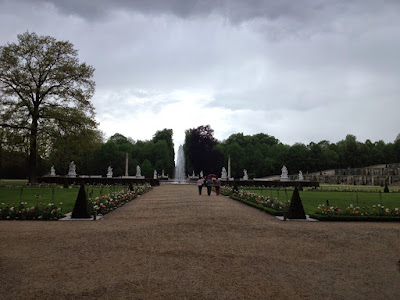 It was a bit overcast and rained on us a bit (we hid under the trees until it stopped), but otherwise a nice day. We walked out to the New Palace, which Patricia had wanted to check out, but the next time to get in to tour it was a while after we got there so we decided against it. Really at that point I just wanted to lay down as I was so tired! We did take a break on some benches, then walked back to catch the train home picking up some treats along the way. 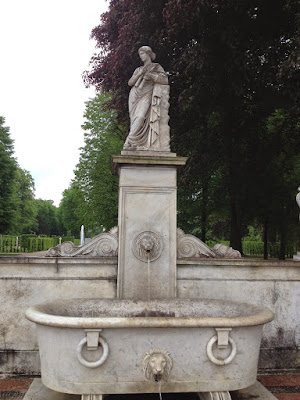 Sunday we walked through the market and art market by Museum Island on the way to the Germany Historical Museum. We spent the day there and man is there a lot of information. I don't think we even saw half of what they had. You definitely need at least two days if you are going to look at everything. They did have an interesting temporary exhibit about the countries over here where the Nazi's had taken over and what happened after the war was over. Really interesting as I learned a lot (and didn't realize places like Norway were so affected). 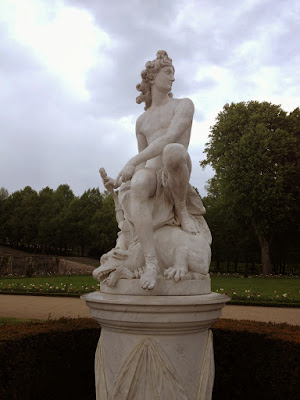 After the museum closed I think we were all a little tired of walking so we took the bus 100 to the Victory Collumn and Patricia and I walked up to the top to check out the view (Raymond and I had gone up before with his parents). Before I move on here are the last of the photos from Potsdam :) 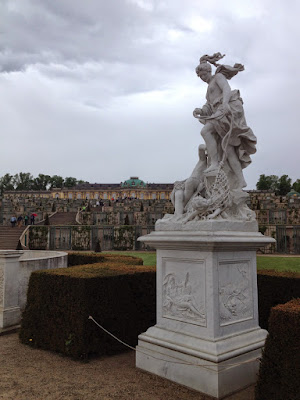 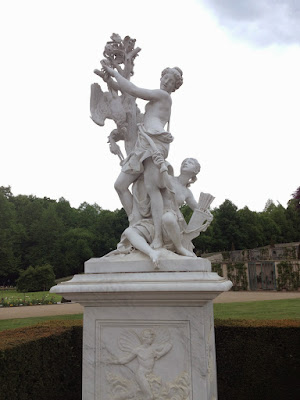 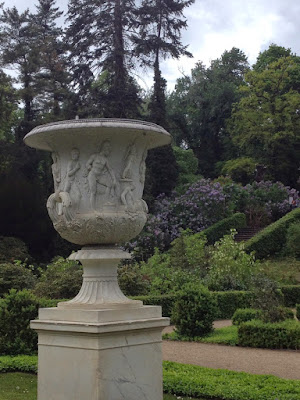 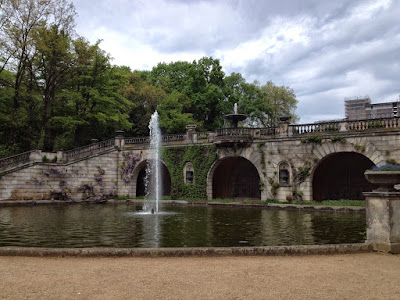 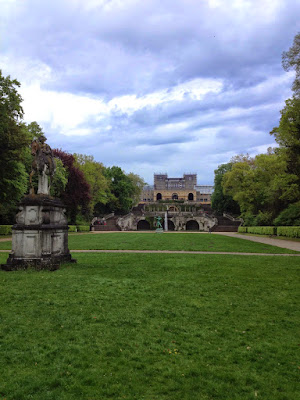 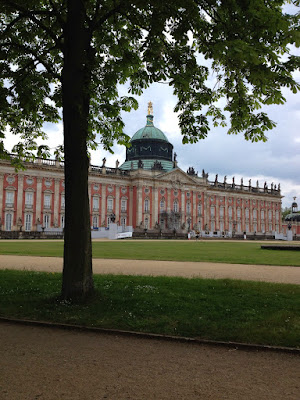 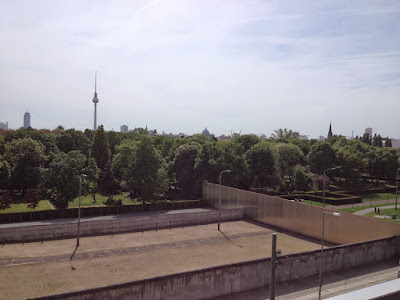 Monday was Patricia's birthday so a very special day indeed! We started the day with the Berlin Wall Memorial. The photo above is from the viewpoint across the street from the section that is still up with the two walls. Again it was a ton of information. 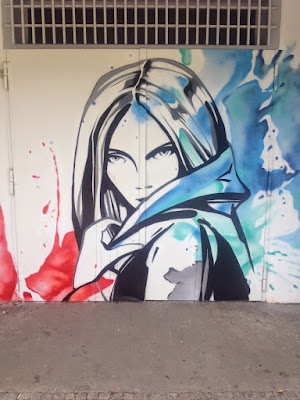 After that we had some time before lunch so we sat in Mauerpark for a bit before heading off for dumplings for lunch! On the way to the train after we ate we passed by an ice cream place so of course we had to stop (especially since they had vegan flavors) as who doesn't need ice cream on their birthday? Then we walked along the East Side Gallery and across the bridge to Kreuzberg, and then over to wander through Friedrichshain and sit in the park until dinner time. 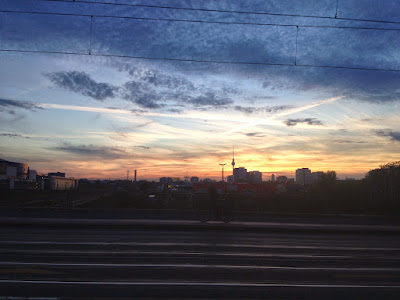 We had dinner at Santa Maria for some tasty burritos and margaritas and treats of cupcakes and brownies across the street. All the treats for her birthday! 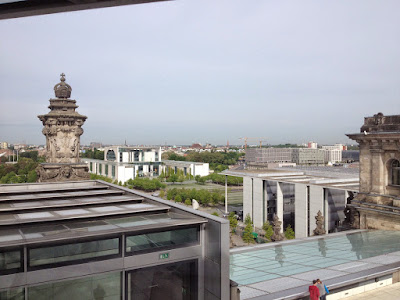 And finally Tuesday, Patricia's last day, we started off with an early entry to the Reichstag. That is another thing I always enjoy taking people to it is informative, you get to see the city from higher up, and I just think the building itself is interesting. 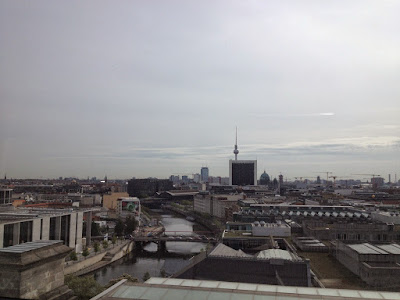 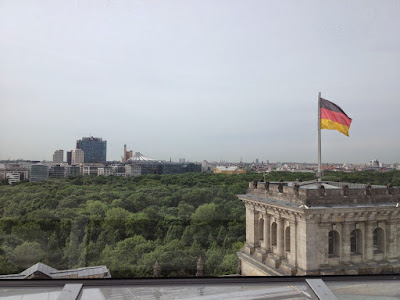 There weren't very many things left on Patricia's to do list so we tried to get them all checked off. After the Reichstag we headed down to KaDeWe - this big, fancy store to spy on what they had. Way out of our price range, but fun to look. There was a market in the square across the street so we got Patricia a bratwurst and I had some asian foods and sat enjoying the sun. One last adventure to the Turkish Market since it was Tuesday and then we headed back to my place so Patricia could pack and we didn't have to worry about getting home early to do so. 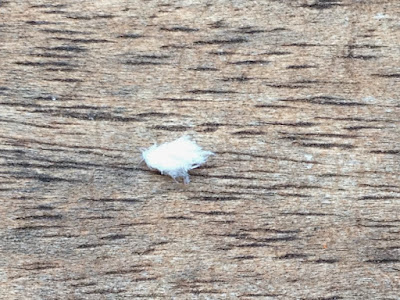 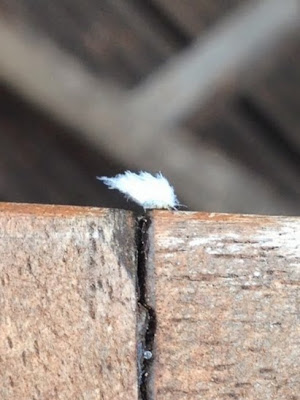 After she was all packed up we headed up to the goat park and had some beverages in the beer garden and just wandered around until dinner time. While we were sitting with our beverages this bug was on our table. At first I thought it was just a bit of fuzz, but then it was moving. So strange. No clue what it is as I haven't seen anything like it before.

I had a great time with Patricia and she went home way too soon! We did fit in a lot of stuff so it was fun. Next time hopefully I won't be feeling so yuck on a few of the days and it will be even better!