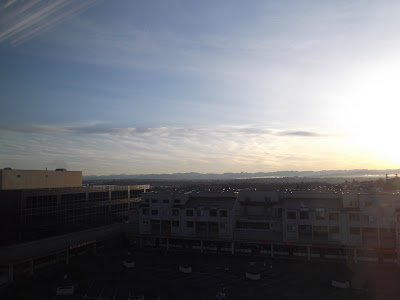 Yesterday we were walking around and Raymond asked if I had posted about Seattle yet. I said I have been working on it and will get it done eventually. Then he was like yeah Seattle is a nice place to visit, but I don't know if I could live there again. I agree - I don't like it as much as I did when we lived there. I mean it is a nice city and I did enjoy our visit, but now we have Berlin to compare it to and Berlin is soooo much more amazing it is hard to imagine going back there permanently. That I suppose is one of the problems with living in an amazing city - you don't want to leave! Anyways back to Seattle. 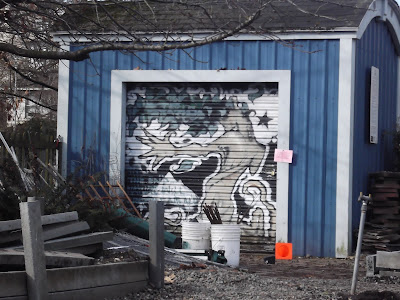 So on Monday we got up after Gillian and Jesse had left for work and again went to Wayward for breakfast. We had to eat there as often as we could since you cannot get food like that here in Berlin. 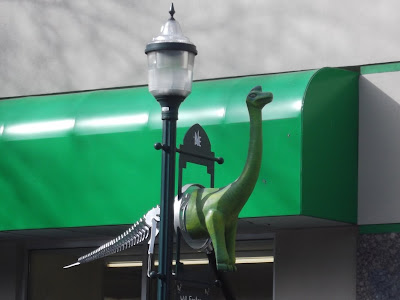 Afterwards we walked down the Ave and spied on different places checking out what was new and different. 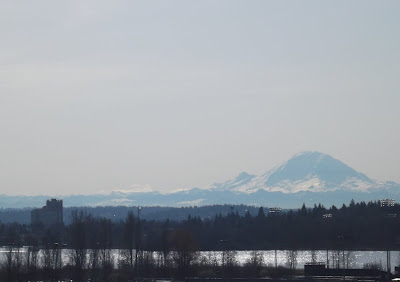 After that we walked down 45th to the University Village where lunch would be for the day and do a little shopping. As you can see it was a gorgeous day - a little chilly if it was windy, but otherwise perfect for walking around. 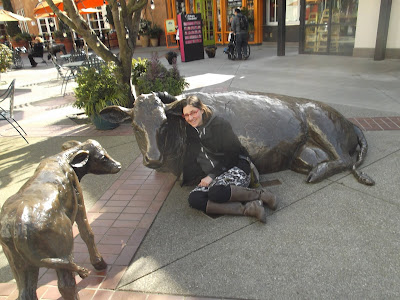 There were a lot of cow statues all over the place which was a little odd. 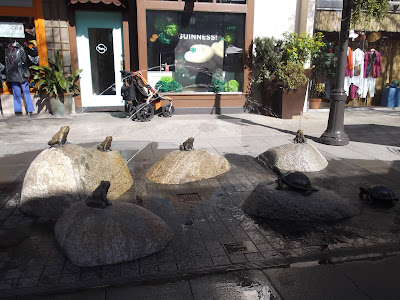 There was also a weird fountain with 5 frogs on rocks surrounding this one turtle (on the right in the shadows). It went through this program where one of the frogs spits water onto the turtle for a little bit. The turtle then gets annoyed and spits water back at the frog. Well frog has a posse so then all the frogs spit on the turtle. Poor turtle - he was just trying to stick up for himself! 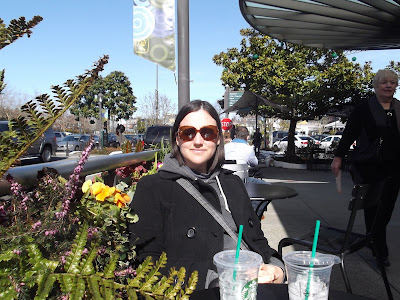 Having a sitz and a beverage and enjoying the sun during shopping. 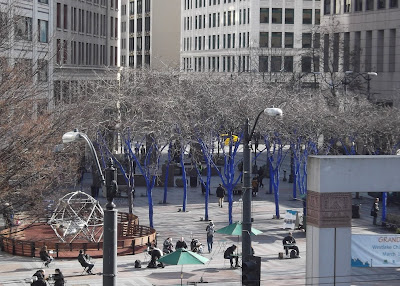 After eating lunch at the U Village (we ate at Veggie Grill which was amazing. Like healthy vegan fast food - they have burger and sandwiches and such and you can get your burger on a bed of steamed kale instead of a bun which I loved!) we headed back downtown and got off the bus by westlake. I was happy to see that the trees in the open area across the street were still blue! I remember taking the bus past them right before I left and seeing them and loving them. 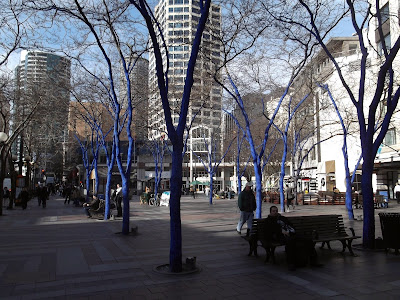 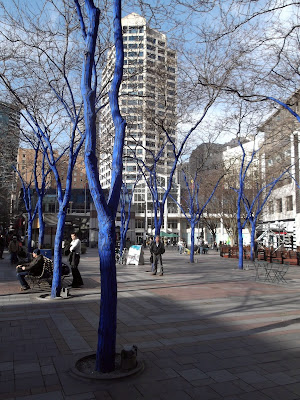 They are just a really nice shade of blue and I really like them. We wandered around the area a bit then stopped in at my old job to say hello to everyone. We were going to catch a ride back to Gillian's with her on her way home from work so we had some time and had a nice visit with everyone. It was so nice to see everyone again! 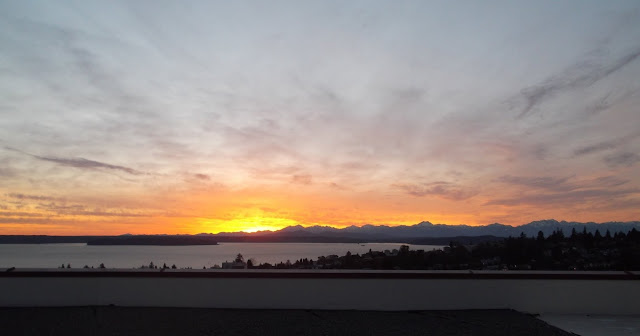 We got back to Gillian's and found this amazing sunset. We went up to the roof to check it out and it was so beautiful! We met up with Jesse and headed out to dinner and drinks (side note Gillian kept complaining that I wasn't drinking a ton. I did have a margarita with dinner the first night and I was expecting to drink more, but this day I woke up with my ear kind of hurting and feeling a little clogged so I got some sudafed and it seemed to be helping, but I didn't want to drink as then I would wake up the next day feeling worse which I was trying to avoid). After dinner we stayed up talking as it was our last night staying with Gillian while Raymond went to sleep as he was tired. 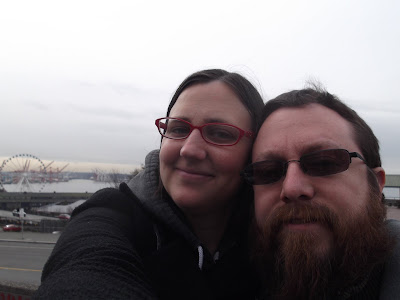 The next day we got up and got a ride into town with Gillian on her way to work. I woke up and my ear was bothering me more than the night before, but still not too bad. We met up with Susan for breakfast which was nice. It was good to see her again and we had a nice time just hanging out. Then we walked down to the market and got some vegan treats from the bakery there and sat by the water for a little bit. Afterwards we met Laura for lunch which was nice to catch up with her again. 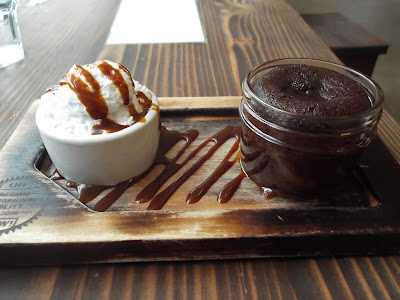 After lunch we dropped our stuff off at Max's since we were going to stay there for a few days then headed down to Ballard to wander around and eat some treats. There is a molten lava cake place, Hot Cakes, and they have a vegan cake we tried. It was very tasty, but super rich. It was a very small jar of cake, and we shared one and I had trouble eating my entire half of it because it was so rich. Raymond really loved it, but then again he is a bigger chocolate lover than I am. After eating out treats and playing some video games at Full Tilt we headed over to the U District again for dinner with Matt at Pizza Pi. We used to eat Pizza Pi fairly often and while it is still tasty we have much better pizza at the vegan pizza place here, but it was nice to visit with Matt. After dinner we headed back to Max's and I went to bed shortly thereafter. I was super tired and by the time I got to his place my ear felt like it was full of water or something. Not very fun and annoying, though I didn't really feel bad otherwise which was good, besides being really tired probably from lack of sleep because my ear was hurting. I was hoping it would just go away and that the early bedtime would help (Raymond stayed up later visiting with Max).

I woke up the following day with my ear feeling even worse! I was really tired and just wanting it to go away. I called a few places to try and get a cheaper doctors apt but no luck. We were going to have lunch with my old coworkers so we headed downtown a little early to go to the pharmacy and see if they had any ideas. Their idea was sudafed or go to the doctor and they sent me across the street to the doctors. They had an opening later in the afternoon so I took that and headed off for lunch with the coworkers. We had a large group and I couldn't hear very well out of my one ear, but it was fun none the less. Afterwards we hung out until it was time for the doctor. The doctor was really nice, and a lot cheaper than I thought it would be, but she did confirm that I had an ear infection and gave me a prescription for drugs to help it. Thankfully they started working pretty quick, but it wasn't really starting to feel better until the next day.

Later that evening we went to trivia with the trivia crew plus Max which was so much fun. I miss trivia and need to find one here to go to (even though I am sure I will be horrible at it at first at least). We lost horribly, not even perfectly average but I still had fun. It was really nice just seeing everyone again. We really didn't do a whole lot on the trip besides meet up with friends to hang out which was the whole point (and eat tons of food). I guess that is all for now as the next day was busy with lots of photos and it is getting late. Until next time.