It is getting chilly 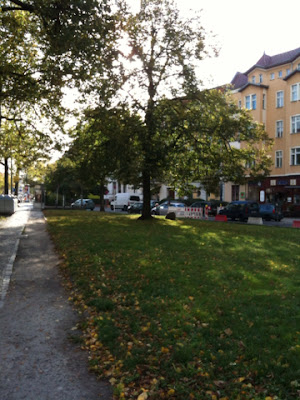 Fall is here for real. It is getting cold and as Raymond said the other day he thinks it is just going to keep getting colder. It will be interesting to see what the city is like over the winter. So what have we been up to? Well I finally am feeling better. I made myself be lazy for a while to make sure and that was probably good as now I am good as new! We went to a housewarming party for some of Raymond's coworkers last Friday and had a good time. They had no furniture yet so it was a big empty room, but they were on the top floor and have a balcony and it was nice (though imagining carrying all of the furniture up the billion flights of steps...that is crazy). We talked with some people who don't work with Raymond and it was really nice. The one guy was telling us about this cooking club he goes to where you cook meals and then eat together and how he is trying to make them more vegan friendly. Apparently last months was all vegan and delicious! If only we had known....I would love to cook together with people since I love cooking and eating. We didn't stay out too late as I got tired and I was still taking it easy to make sure I was better. Oh and the one lady there was saying how she started a business and was asking what I do and I said accounting. She was all I need an someone to do my accounting because I just don't have time anymore so we exchanged info and she is on vacation for 2 weeks and then we are going to touch base. So maybe I will have some income soon...we shall see.

We also got our furniture which is great! We have some couches now, out TV and the cables for the video games are on the way (we did have the Wii one, but it is not working right - there is something loose in it so it only works sometimes so we have to send it back. I did however just dance the past 2 days and I loved it! Last night Raymond was all you know we could be playing wii right? So we hooked it up and Just Danced together and I totally crushed him in the first dance. So he was all I think my controller is not working or I am standing in the wrong place or whatever so we switched controllers and places...and I still crushed him. I am just better at it than he is :)

Let's see I don't think anything else exciting happened. We have just been trying to get everything situated in the apartment and it feels like home now instead of just some place we are sleeping. It is pretty cold though. We need a part to hook up to the heating unit so we can turn it on. We have tons of blankets and such to keep us warm for now and it is not too bad. Really the other day for the first time it was colder outside than inside the apartment so I don't think it will be that bad keeping it heated for the winter.

The only other fun thing is we have been trying to decide what we are going to use all of Raymond's vacation time on, where to go and such. We are going to be taking a week and going to Paris for his birthday (I had asked him where he wanted to go and he decided on Paris for the food! I am rubbing off on him! That and we will have time for the museums and such).  Then I think we will be taking a Tues-Sun in Salzburg for Krampus festivities the beginning of Dec then we are going to go somewhere between Christmas and New Years but we are not sure where yet (this is all as long as he can get the time off in Dec which shouldn't be a problem). We are debating between Budapest, Brussels/Brugge, or going somewhere warmer like Barcelona, Malaga, Lisbon, Naples or Rome. We shall see. Too many places to choose from! And so easy and cheap to get to!

And now for an observation. It seems like almost everyone here smokes. I knew that a lot of people did and thought it would be annoying, but somehow it is not. We were eating dinner out a few weeks ago and were sitting outside and someone was sitting at the table right next to us and they started smoking. I thought great now I am going to be smelling smoke all through dinner....but somehow I didn't. If I wouldn't have seen them smoking I wouldn't have known anyone was. It is odd how I rarely smell smoke, but yet people are smoking all the time. The best thing though is everyone smokes outside. I am hoping this will still be true when it is freezing out, but it seems to be so far and that is wonderful. So let everyone smoke if they want, it doesn't actually bother me at all.


Oh another thing - I have no idea how any of our stuff we shipped actually made it here. We had our mail forwarded to Raymond's parents and they sent us an envelope of mail which we just received this week. If there was anything small in there it would have fallen out as the edges were all torn. In the photo above the bottom edge there is town about a third of the way up. Crazy! Our boxes seemed to be barely held together with lots and lots of tape. I have no idea how things get so beat up! If anyone does send anything you might want to extra reinforce it with tape and such, especially the edges of envelopes or we might not get whatever you send....It still boggles my mind how it can get soooo beat up. Oh well.

I guess that is it for today. Next time I for sure will have photos of our place with furniture. I would have taken some to put up but it is dark now and the light bulb in the living room burned out and we don't have a ladder yet so we can change it. We should probably get one...