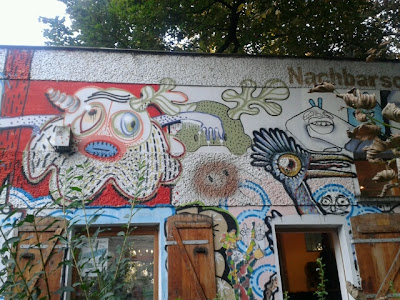 So I know I didn't update last week, but that is just because we didn't do anything fun and exciting. Last weekend was overcast and rainy so we went shopping and ran errands on Sat and then snuggled up and watched movies on Sunday (Raymond wanted a lazy day anyways so it worked out :) 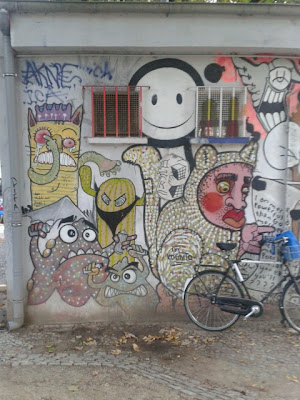 The above two photos are from a park close to where we had dinner one night. We were looking for some ice cream afterwards and sat in the park near this building - not sure what it was, but there were lots of people milling about. 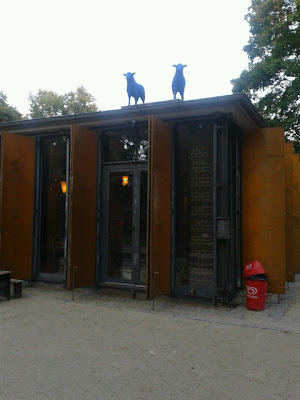 There was also this daycare center or something with blue sheep on top....kind of random. Raymond did however point out that this was the same park we took a nap in when we visited last time. There are all kinds of silly sculptures and such around town which I love. 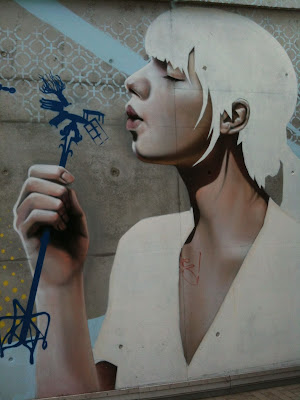 While running errands I came across this painting on the underpass which I loved. I know this is a bunch of random photos, but I liked all the art that is around, even though there is not a fun story to go with them. 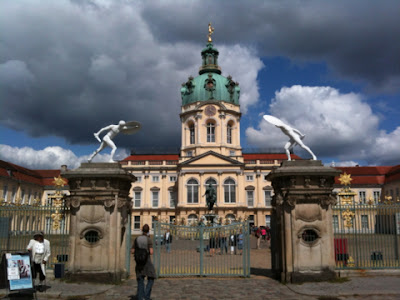 This past weekend was super busy. We rode our bikes out to the Wannsee (or close to there). Along the way we went through Charlottenburg which we had never explored (section of town on the west side of the city). We came across Charlottenburg Palace which we will have to go back and explore at some point. The day was sunny off and on with this big stormy looking clouds, though it did not rain or anything all day which was nice. 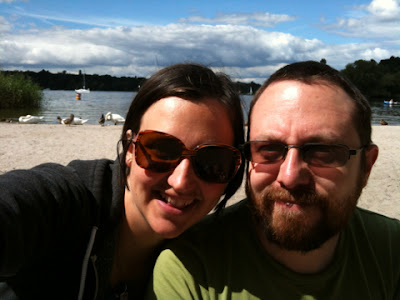 Here is us at the beach where we stopped. It was a small beach and when we got there there was only one other person there which was nice. A little farther south is the main beach which apparently is quite popular. 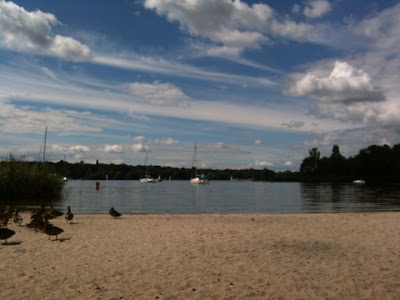 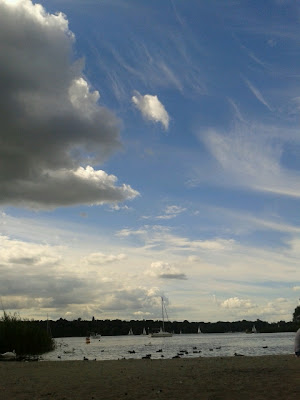 It wasn't a very big beach, but we had a picnic and lazed around (it took us about 2 hours by bike to get there - and we found some hills! Apparently they are in Charlottenburg and west of that). When the sun was out it was really warm and nice to wade in the water (it was really shallow - like up to my knees out for a long way so the water was cool, but not freezing cold). However big huge clouds kept coming and blocking the sun and making it cold enough we had to put on our jackets and such, then 15 min late the sun would be out again. It was nice to get out for a long bike ride and sit by the water for a bit. 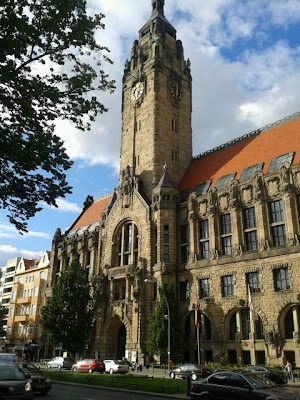 On the way home we stopped for dinner in Charlottenburg near this Rathaus center. 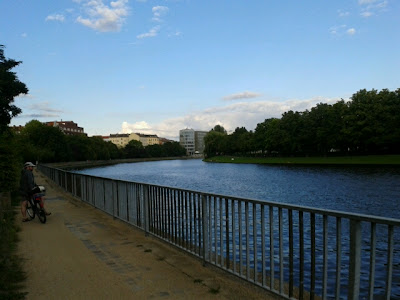 We also rode along the river for a while which was nice. Some of Raymond's coworkers birthdays were last weekend so they had a BBQ in the one park by our place so on the way home we stopped by there. It was nice and I did see a bunch of shooting stars, and later saw that the meteor showers were peaking that night! So I saw them by coincidence. 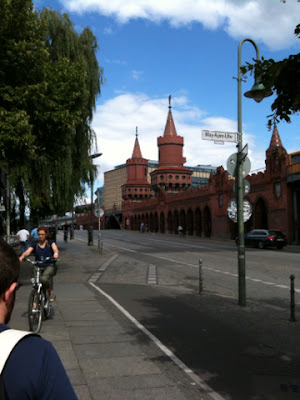 On Sunday we went to a new flea market to check it out and I like it better than the one near our house, but still it didn't have much I would want to purchase. Lots of old cups and dishes that I think are pretty ugly. Oh well it is fun to explore. There was also a homemade market with all local people and their crafty things so I wanted to go to that. We had to go over the bridge pictured above to get there. 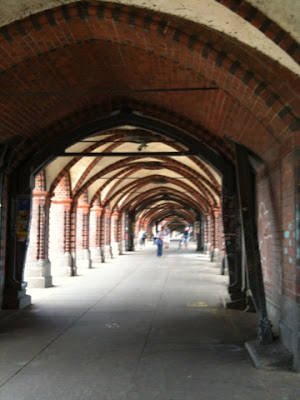 Under the walkway on the bridge. The one good thing about the homemade market is that it was right next to the best ice cream place (and they even had chocolate which is  my favorite). I was very disappointed in the market though - there were not very many cute things. This means I will have to start making some as...there is a great void that needs to be filled. Most of the homemade things were clothing or oils, not cute pictures or plushies or anything. I was a little sad as I expected more....or at least something that would give me ideas or something. Oh well now I know. 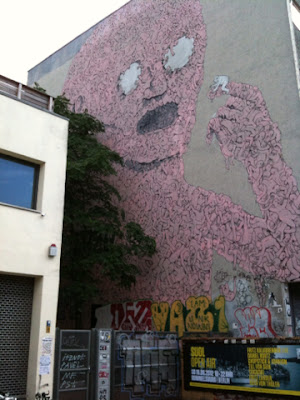 And one last mural from the end of the bridge.

So that was our fun exciting weekend. It looks like this week is supposed to be nice, but this weekend might be a little warm so it might be time to check out another lake for swimming!

Some more thoughts on Berlin:

1) Berlin is dirty. I think I mentioned that before, but the people here are a bit ridiculous in general about just littering and leaving their garbage wherever. It is ridiculous. Like we got off the train one day and some guy was walking out and had some garbage (I am surprised he took it off the train, most people leave it next to the seat) and was 3 steps away from the trash can and just threw it on the ground. I was just like really? The garbage is right there and you are even walking right by it! I just don't get it.

2) People here read. A lot.   If you ride the subway most people are either reading a book or just sitting there doing nothing. We rode the train one day during a busy time and of the 15 or so people I could see 9 were reading paper books, 2 were listening to music, 1 was on a smartphone and the rest were just sitting there. It is kind of awesome how you see people with books all the time. And paper books for the most part - ereaders are not big here. The books they carry are often time very big and thick, but they still carry them around with them. I love it. I need to see if I can find a book group here.

3) In the same vein people don't really use smartphones here. I don't even know if most people have them....you just don't see people on their phone all the time. Usually when you see someone on their phone they are talking on it and using it as an actual phone. I like that. It is not like riding the bus in Seattle and everyone is on their smartphone. It is interesting, and it feels more personable. Like you could go up and talk to someone and you are not interrupting them.

4) If people are listening to music or something (most people don't walk around with headphone on) the headphones they use are not ear buds but big headphone in bright colors like these: Amazon headphones.

Oh one last thing I almost forgot - I really think this is the place for me. My cousin sent me a link to the My Little Pony convention that is happening in Seattle next weekend. I was just like man...right after I leave of course they have something awesome like this. So I searched My Little Pony Berlin to see if there were any fun events here and found this article: Pirate Party Calls Pony Time. So there is a pirate party here which now has seats in the parliament and they can call Pony Time and watch an episode of My Little Pony when they can't come to a consensus and such. Ridiculous! I love it! How do I become a pirate party member? I am all in favor of Pony Time! From the article "Because they became friends and could reason together, they can solve their problems. That’s what the Net brings about as well. Very different characters think together and find resolutions. This is really the same thing -- but depicted using ponies,"says party worker and pony expert Stephan Urbach, who introduced his ponies into the Rules of Procedure of the Berlin Pirate Party: "At a party congress, Lotte and I thought: Hmm, kind of an aggressive mood here, maybe we should watch a bit of 'My Little Pony.'" Amazing. Also is there an official test to become a pony expert? So great. Alright now off to make some lunch.