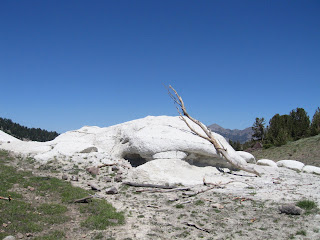 By Jen in Bookland February 13, 2016
Getting to Railay Beach from Bangkok kind of takes forever. We had taken the overnight train from Bangkok to Surat Thai where we had to switch to a bus to take us to Krabi. I slept much better on the train that night. I had put in my earplugs and only woke up a few times. It was great. I woke up around 6 and was ready to go. Raymond was just like you are so wakey! I was just like yeah - I actually slept! So I was all refreshed and ready to go.    We had picked up some banana muffins in Bangkok for breakfast, as well as leftovers from our feast the night before, and the muffins were delicious! We should have gotten more of them than we did. So we got to Surat Thani and had to switch to a bus like I said. It was a bit confusing where we should go and what was going on, but we got on the bus and it took us into Surat Thani Town. That bus was really nice so I thought the trip to Krabi would be great. Only we had to wait a bit and switch buses and the new bus, the one that took us
Post a Comment
Read more

By Jen in Bookland July 24, 2012
From In Berlin Hello! So I have been here just over 2 weeks now which is a bit crazy and things are finally coming together. I really like our apartment. Lots of room and it is very quiet as we are a block off the main road. We finally got some furniture last week so the place is not as empty and we actually have chairs to sit on and a bed to sleep in (that is not the noisy air mattress). I even have my craft table set up, but I am still looking for storage for my fabrics and such (the ones I wanted were out of stock). Yesterday I sewed up curtains for the front windows so we can have the privacy blinds (big metal blinds that come down and cover the front windows and are on most of the ground floor windows around town) up and Raymond won't freak out that people can see in.The bedroom/my craft room is pretty much done. The back of the house gets much better light during the day so I set up shop back there to take advantage of it. If I worked in the front rooms I would need the
2 comments
Read more

By Unknown May 22, 2008
So I only have six minutes left and just wasted a few seconds letting you know, but I need some assistance in getting things off our iPod onto the net. In the last town we were in, I came so close to getting it up only to be thwarted by the only damn cd -burner in the shop being broken. This is the problem: my iPod is mac formatted - the folks at Apple thought it would be hilarious to not include some sort of compatibility between windows and mac versions of iTunes to read the voice memos you record from any computer. If your iPod formatted on a mac (I believe it's HSF +), windows iTunes will tell you to reformat the buggar . And get this, the iPod records voice memos in old school PC style wav files. What the hell. Anyway, I can't test or install things on this library computer, but if someone checking the blog who is tech savvy could find a program to retrieve data from a mac formatted iPod from a windows machine - a program that doesn't use a god damn insta
2 comments
Read more